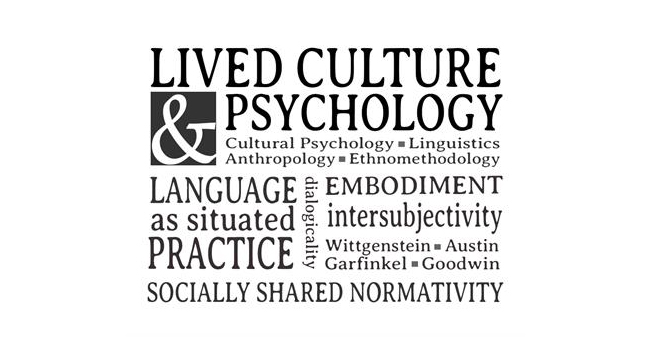 Lived Culture and Psychology: Sharedness and Normativity as Discursive, Embodied and Affective Engagements with the World in Social Interaction

Special Issue in the journal Frontiers. The aim of this Research Topic is to contribute to our understanding of the psychological means that bring about cultural forms of human conduct and experience. The publication is edited by Carolin Demuth, Pirkko Liisa Raudaskoski and Sanna Raudaskoski.

We consider cultural forms of perceiving of and acting in the world as primarily rooted in socially shared normativity. In this Research Topic, we want to examine closer what exactly can be understood by “sharedness” and “normativity” by taking a closer look at discursive, embodied and affective engagements with the world in social interaction. As Charles Goodwin has convincingly shown, these discursive practices need to be understood as part of a complex, collective and cultural human activity composed also of bodies, material artefacts and the space. Moreover, as has been pointed out by various scholars, an understanding of language as activity that brings about normativity also needs to address the affective dimensions inherent in discursive practices. Such understanding of language as practice that binds us to view the world in a specific way and as intersubjective form of action is in line with the modern philosophy of language paradigms as unfolded, for instance, by Wittgenstein, and Austin.

We consider both the sharedness of certain ways of understanding the world and the normative dimension of social life as action based, as processual, mutually shaped, dynamic and fluid, ever evolving meaning making in situated social interaction (cp. Bakhtin, Garfinkel and Wittgenstein). Within the broader field of Cultural Psychology, this Research Topic considers approaches that deem the nature of psychological phenomena to be dialogically intertwined with discursive and embodied practices in social interaction, the shape of which is always situational, ecologically embedded. We specifically want to address the question of methodology. What tools do we have to study empirical materials with this theoretical approach? What makes it possible to see or hear evidence in the data; how is shared normativity analytically recognizable.

Special Issue in the journal Frontiers: Lived Culture and Psychology: Sharedness and Normativity as Discursive, Embodied and Affective Engagements with the World in Social Interaction