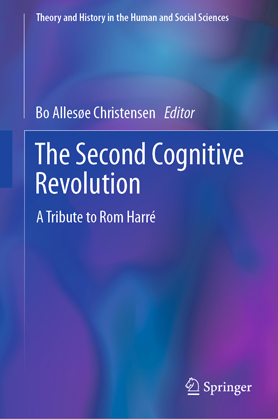 The Second Cognitive Revolution - A Tribute to Rom Harré

This book - edited by Bo Allesøe Christensen - is an indispensable reader for anyone interested in his cognitive-historical turn, and finds an audience with academics and researchers in the social and human science fields of cognitive psychology, social psychology, discursive psychology, philosophy, sociology, and ethnomethodology.

Rom Harré’s career spans more than 40 years of original contributions to the development of both psychology and other human and social sciences. Recognized as a founder of modern social psychology, he developed the microsociological approach ‘ethogenics’ and facilitated the discursive turn within psychology, as well as developed the concept of positioning theory. Used within both philosophy and social scientific approaches aimed at conflict analysis, analyses of power relations, and narrative structures, the development and impact of positioning theory can be understood as part of a second cognitive revolution. Whereas the first cognitive revolution involved incorporating cognition as both thoughts and feelings as an ineliminable part of psychology and social sciences, this second revolution released this cognition from a focus on individuals, and towards a focus of understanding individuals as participating in public practices using public discourses as part of their cognition. This edited volume adds to the scholarly conversation around positioning theory, evaluates Rom Harré’s significance for the history and development of psychology, and highlights his numerous theoretical contributions and their lasting effects on the psychological and social sciences.

Included among the chapters:

More about the book.

The editor, Bo Allesøe Christensen, is affiliated with the Centre for Cultural Psychology and Centre for Interactive Digital Media & Experience Design at Aalborg Univesity.